What are the ingredients in a vaccine?

Vaccines contain tiny fragments of the disease-causing organism or the blueprints for making the tiny fragments. They also contain other ingredients to keep the vaccine safe and effective. These latter ingredients are included in most vaccines and have been used for decades in billions of doses of vaccine.

Each vaccine component serves a specific purpose, and each ingredient is tested in the manufacturing process. All ingredients are tested for safety.

All vaccines contain an active component (the antigen) which generates an immune response, or the blueprint for making the active component. The antigen may be a small part of the disease-causing organism, like a protein or sugar, or it may be the whole organism in a weakened or inactive form. 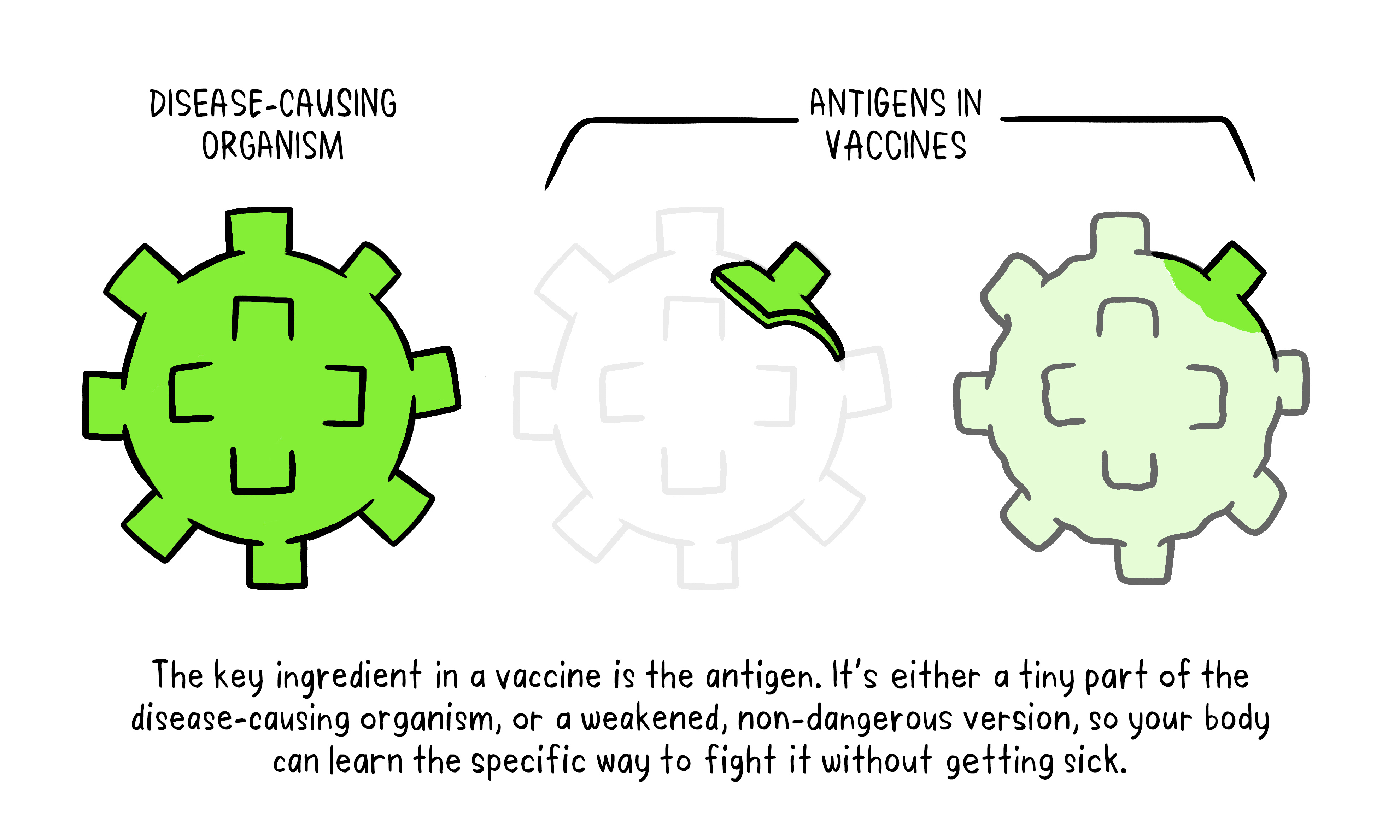 Preservatives prevent the vaccine from becoming contaminated once the vial has been opened, if it will be used for vaccinating more than one person. Some vaccines don’t have preservatives because they are stored in one-dose vials and are discarded after the single dose is administered. The most commonly used preservative is 2-phenoxyethanol. It has been used for many years in a number of vaccines, is used in a range of baby care products and is safe for use in vaccines, as it has little toxicity in humans.

Stabilizers prevent chemical reactions from occurring within the vaccine and keep the vaccine components from sticking to the vaccine vial. 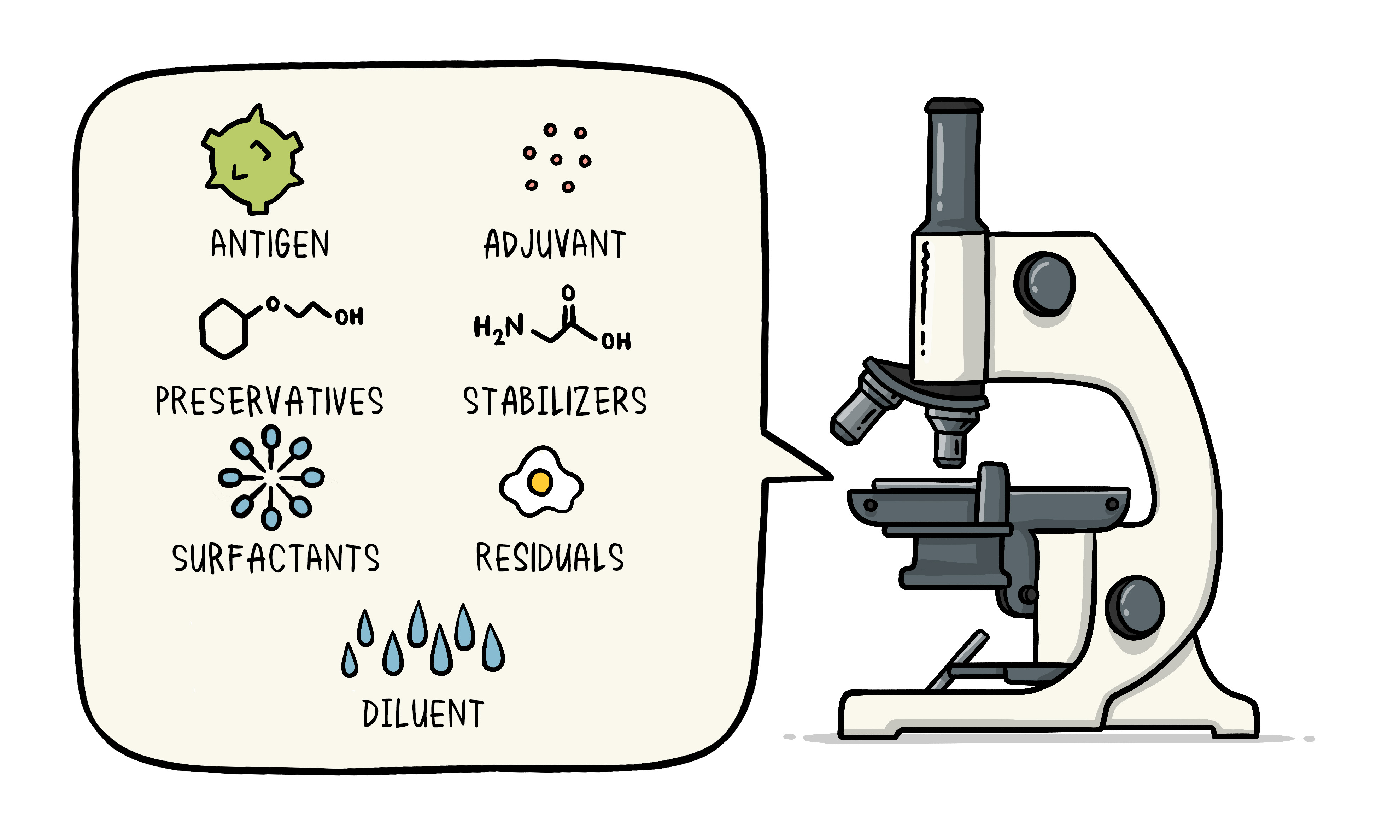 Surfactants keep all the ingredients in the vaccine blended together. They prevent settling and clumping of elements that are in the liquid form of the vaccine. They are also often used in foods like ice cream.

Residuals are tiny amounts of various substances used during manufacturing or production of vaccines that are not active ingredients in the completed vaccine. Substances will vary depending on the manufacturing process used and may include egg proteins, yeast or antibiotics. Residual traces of these substances which may be present in a vaccine are in such small quantities that they need to be measured as parts per million or parts per billion.

A diluent is a liquid used to dilute a vaccine to the correct concentration immediately prior to use. The most commonly used diluent is sterile water.

Some vaccines also contain adjuvants. An adjuvant improves the immune response to the vaccine, sometimes by keeping the vaccine at the injection site for a little longer or by stimulating local immune cells.

The adjuvant may be a tiny amount of aluminium salts (like aluminium phosphate, aluminium hydroxide or potassium aluminium sulphate). Aluminium has been shown not to cause any long-term health problems, and humans ingest aluminium regularly through eating and drinking.

How are vaccines developed?

Most vaccines have been in use for decades, with millions of people receiving them safely every year. As with all medicines, every vaccine must go through extensive and rigorous testing to ensure it is safe before it can be introduced in a country’s vaccine programme.

Each vaccine under development must first undergo screenings and evaluations to determine which antigen should be used to invoke an immune response. This preclinical phase is done without testing on humans. An experimental vaccine is first tested in animals to evaluate its safety and potential to prevent disease.

If the vaccine triggers an immune response, it is then tested in human clinical trials in three phases.

The vaccine is given to a small number of volunteers to assess its safety, confirm it generates an immune response, and determine the right dosage. Generally in this phase vaccines are tested in young, healthy adult volunteers.

The vaccine is then given to several hundred volunteers to further assess its safety and ability to generate an immune response. Participants in this phase have the same characteristics (such as age, sex) as the people for whom the vaccine is intended. There are usually multiple trials in this phase to evaluate various age groups and different formulations of the vaccine. A group that did not get the vaccine is usually included in phase as a comparator group to determine whether the changes in the vaccinated group are attributed to the vaccine, or have happened by chance.

The vaccine is next given to thousands of volunteers – and compared to a similar group of people who didn’t get the vaccine, but received a comparator product – to determine if the vaccine is effective against the disease it is designed to protect against and to study its safety in a much larger group of people. Most of the time phase three trials are conducted across multiple countries and multiple sites within a country to assure the findings of the vaccine performance apply to many different populations. 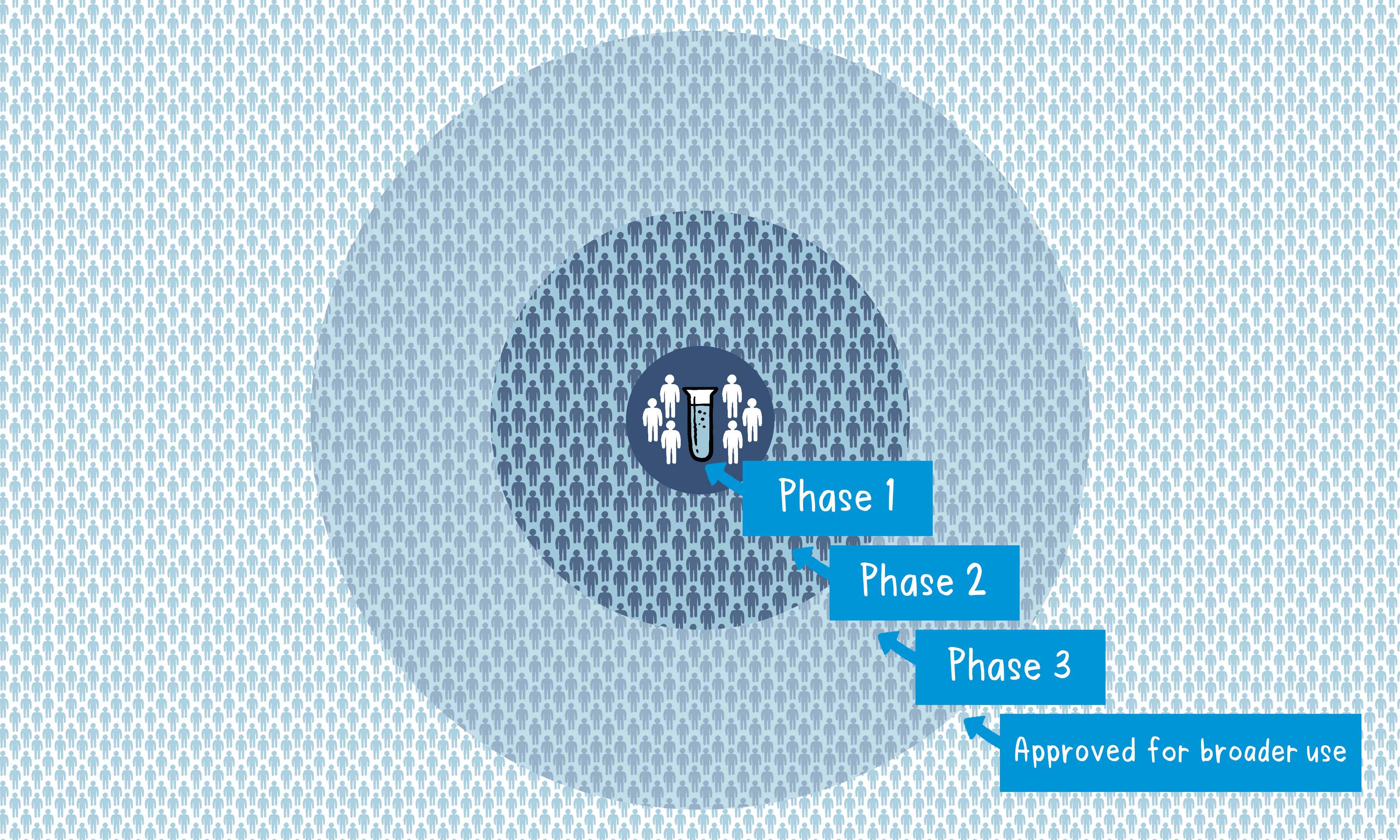 When the results of all these clinical trials are available, a series of steps is required, including reviews of efficacy and safety for regulatory and public health policy approvals. Officials in each country closely review the study data and decide whether to authorize the vaccine for use. A vaccine must be proven to be safe and effective across a broad population before it will be approved and introduced into a national immunization programme. The bar for vaccine safety and efficacy is extremely high, recognizing that vaccines are given to people who are otherwise healthy and specifically free from the illness.

Further monitoring takes place in an ongoing way after the vaccine is introduced. There are systems to monitor the safety and effectiveness of all vaccines. This enables scientists to keep track of vaccine impact and safety even as they are used in a large number of people, over a long time frame.  These data are used to adjust the policies for vaccine use to optimize their impact, and they also allow the vaccine to be safely tracked throughout its use.

Once a vaccine is in use, it must be continuously monitored to make sure it continues to be safe.